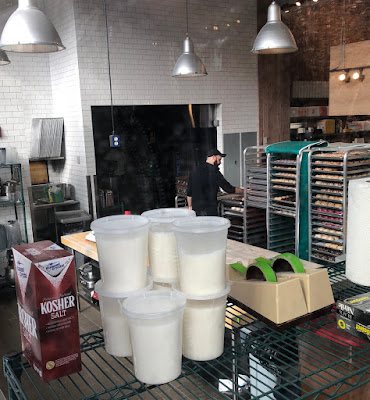 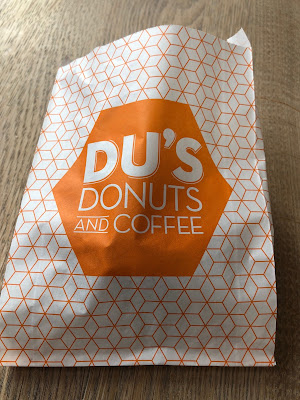 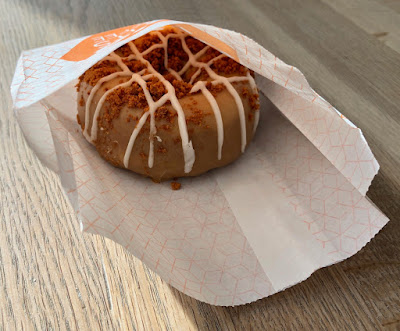 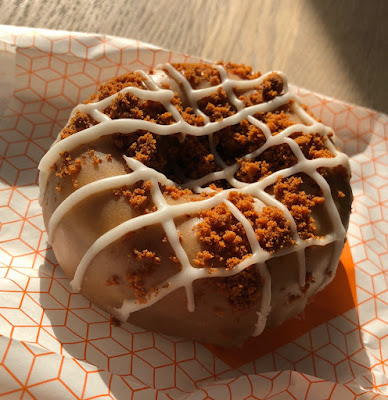 Many years ago I was lucky enough to enjoy a meal at Wylie Dufresne's WD-50 restaurant. His mastery of molecular gastronomy made the entire experience more like a magic show than a meal. I was wowed, but there's only so much passion I can put into non-sweet foods.

Cut to now, and we've moved to a new neighborhood. Within mere steps from the new home-base is DU's Donuts and Coffee, Dufresne's newish passion project-- pure focus upon the donut. It turns out that Dufresne cut his proverbial teeth working in his father's diner, so this love for attention to what makes the quintessential donut is a thrilling full-circle. Well, I don't know if it's thrilling for Wylie but this has made my entire move worthwhile.

We entered the clean spare shop, all glass and wood and high ceilings and pops of orange. One of each flavor of donut is on display, but otherwise, there's not a lot of clutter going on. You're there for a donut (or 12)--just make a selection and they're ready on the trays behind the counter.

I don't remember all the flavors. There were so many enticing ones, and I just kept chanting to myself, "hold it together, we can return any time. Even later today!" Co-taste-tester Mark and I selected the Key Lime and Brown Butter Donut. The lime was zesty and sang above the mellow buttery notes. Most important, it was perhaps the best consistency of a cake donut I've ever encountered--really tops. I'm pretty over the Donut trend, and not much surprises me anymore, but this was a wow-worthy donut.

I can't wait to return and try all of them. Thank you, Wylie, for focusing your magic on donuts!