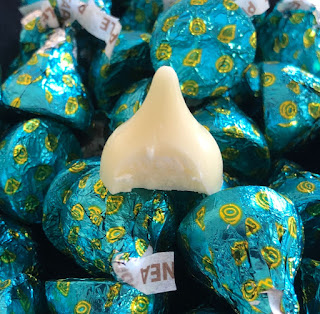 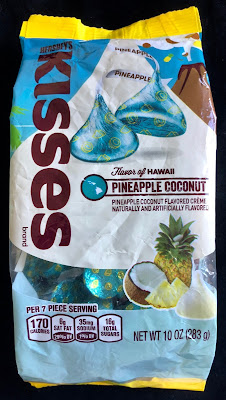 For awhile Hershey's was producing a range of limited edition flavors that were thematic by state. For instance, the "Taste of Hawaii" was Coconut Almond Kisses. I'm a bit confused by this new "Flavor of Hawaii" release of Pineapple Coconut Kisses. It's a nice surprise, but I'm unclear on how these different lines interact. The Pineapple Coconut Kisses are described as Pineapple Coconut flavored Creme. The aroma of coconut is overpowering, a direct aromatic correlation with old-time suntan lotion. It's not a bad smell but it's not that delicious, either. And it overpowers this terrific pineapple flavor that I think should be allowed to take center-stage. I think a whole new line should be built with fruit flavored "cremes" with a little burst of fruit filling in the center. Imagine that with pineapple. It could be phenomenal. Or Cherry. Or Raspberry. Just a little dollop of fruit jam in the center would put some of these fruit-flavored cremes over the top.

Score (overall): 2
Score (pineapple element): 3
Score (my idea to include a dollop of fruit jam in the center of fruit creme kisses):4