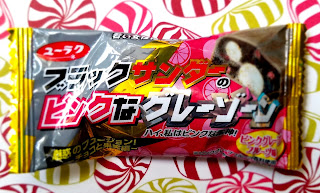 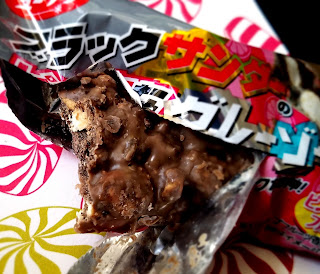 Until recently the Black Thunder bar was unknown to Obsessive Sweets, but now this intrepid candy consumer is quickly making up for lost time. The inexpensive Japanese candy bar is comprised of chocolate cookie pieces and puffed rice all covered in a thin layer of dark chocolate. It's like a more-aerated wafer bar. Then there are a zillion varieties on the traditional bar, such as this Black Thunder Grapefruit bar. I like the audacity of combining sparkling grapefruit citrus flavor with chocolate-- unheard of! Yet it works. Each bite is so light, the chocolate forms a base-note whereas the floral grapefruit rises above. It's tasty! Hopefully there will be more varieties taste-tested on obsessivesweets in the near future. So many flavors to try!