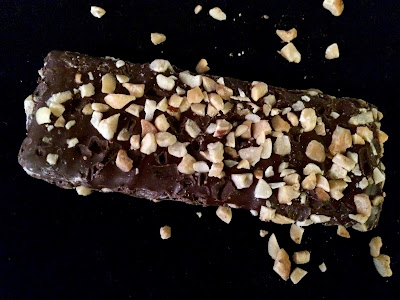 From the look of the Nestle Almon Ris, I expected to bite into something akin to a Heath bar, hard toffee enrobed in chocolate with a sprinkling of peanuts (rather than Heath's almonds). But no! The Almon Ris exceeds these expectations. Instead, one encounters a thin bar akin to a Butterfinger, but with a higher ratio of chocolate with plentiful peanuts added on top. It's delicious. Beware, though, the messy nature of the chopped nuts. As soon as you open the package they begin to spill out and with each bite they spread (everywhere). I made a huge (not to mention delicious) mess. Stores in NYC should attempt to carry these- I've never encountered an Almon Ris in the United States and believe they would constitute a popular item with the candy bar consuming audience.