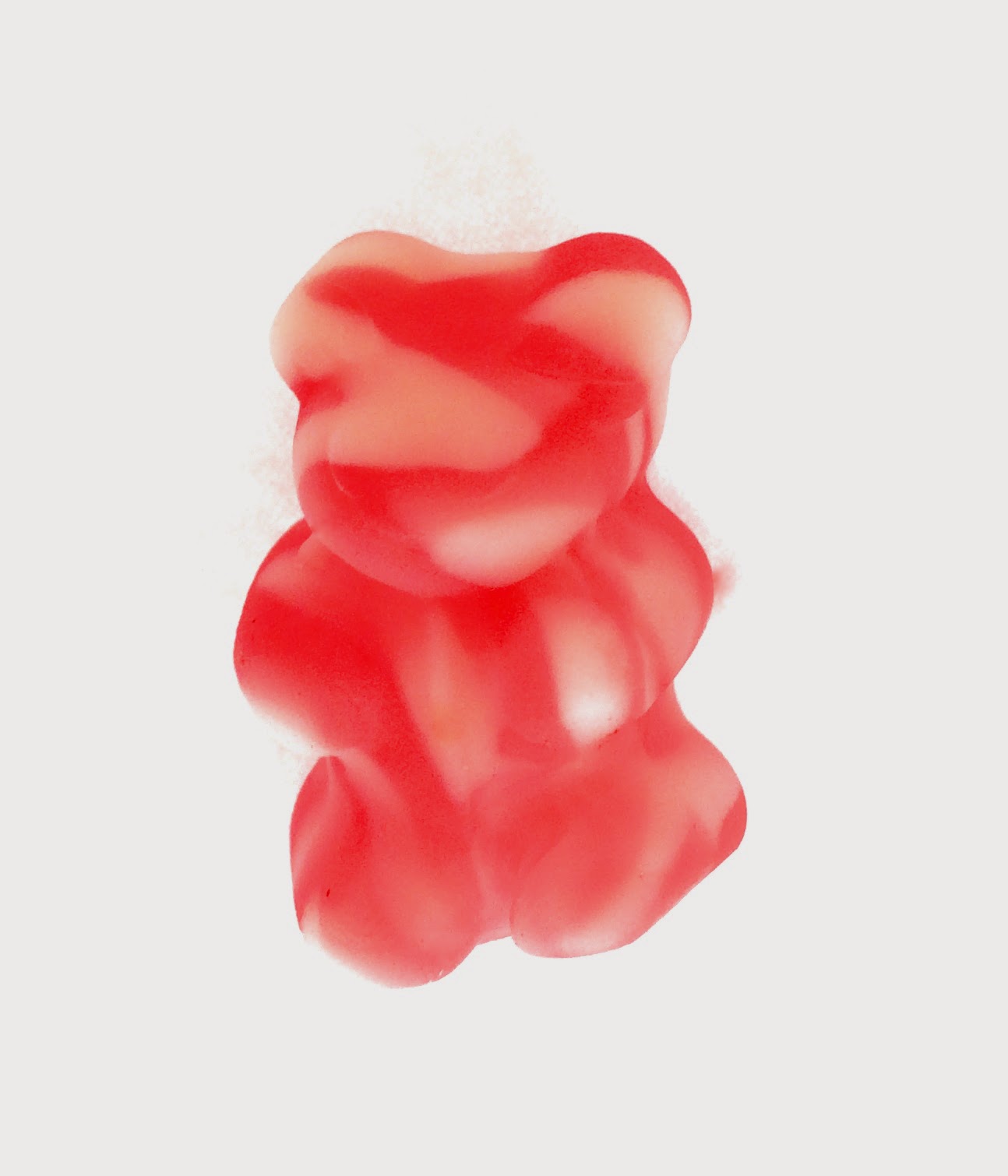 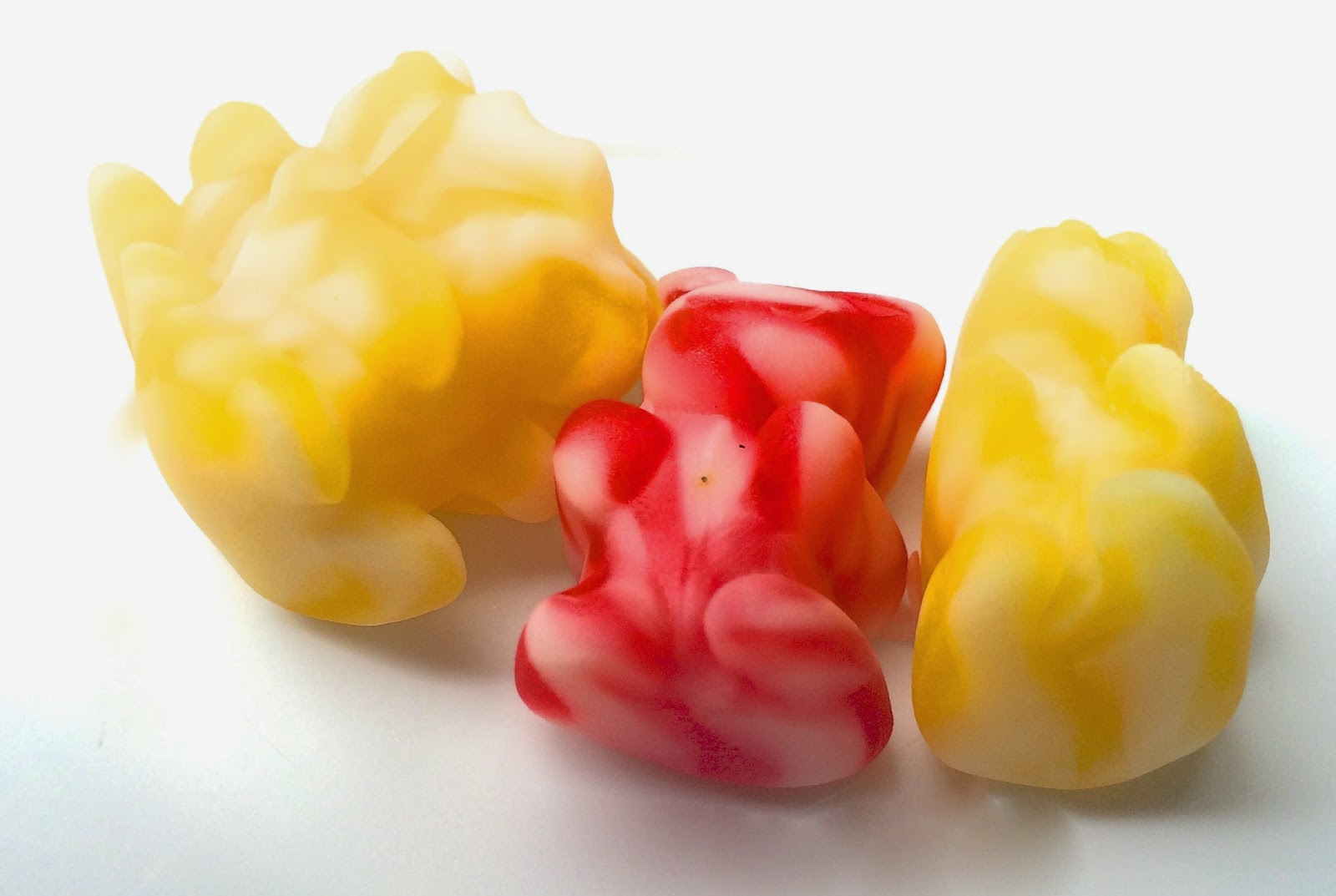 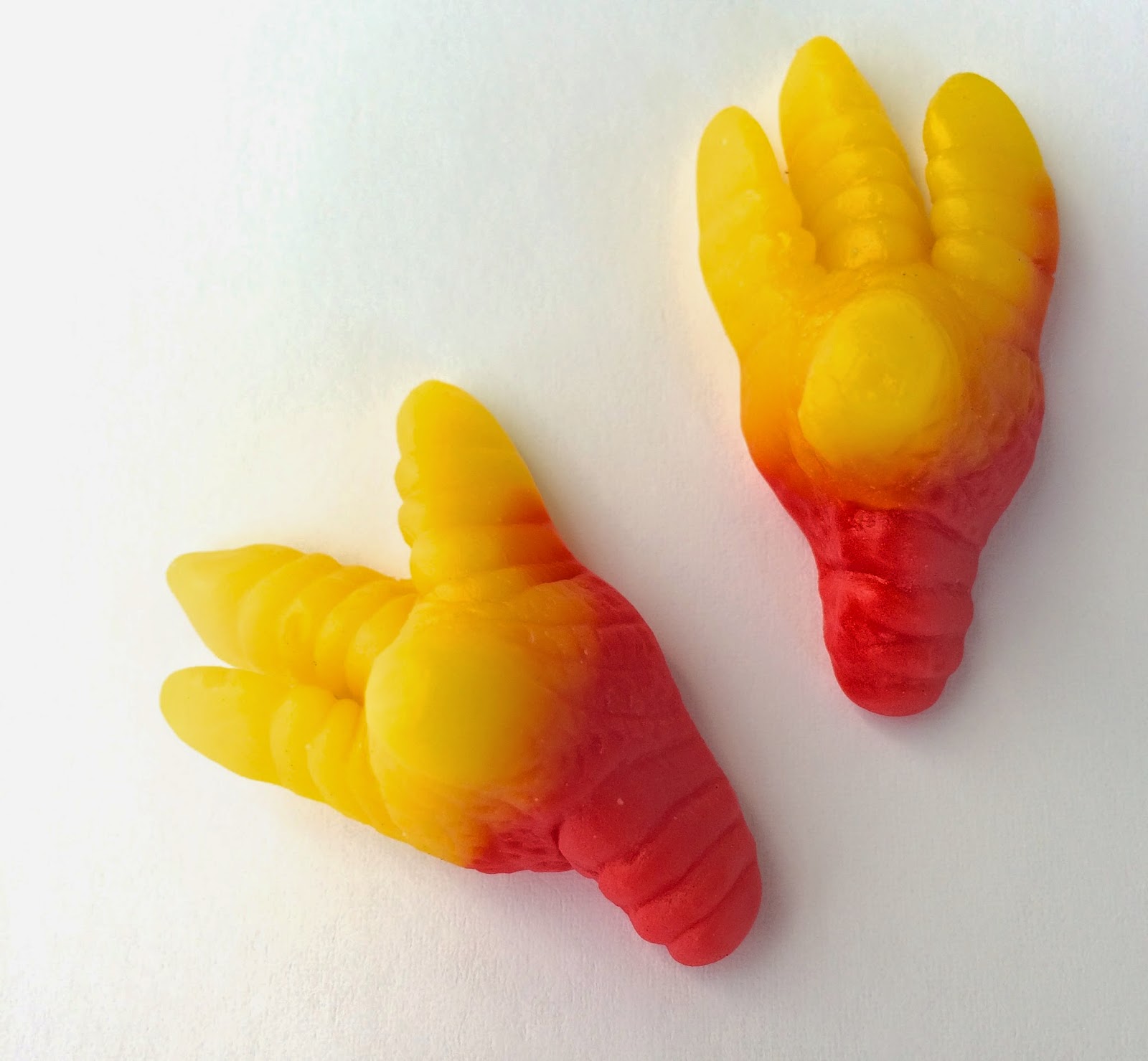 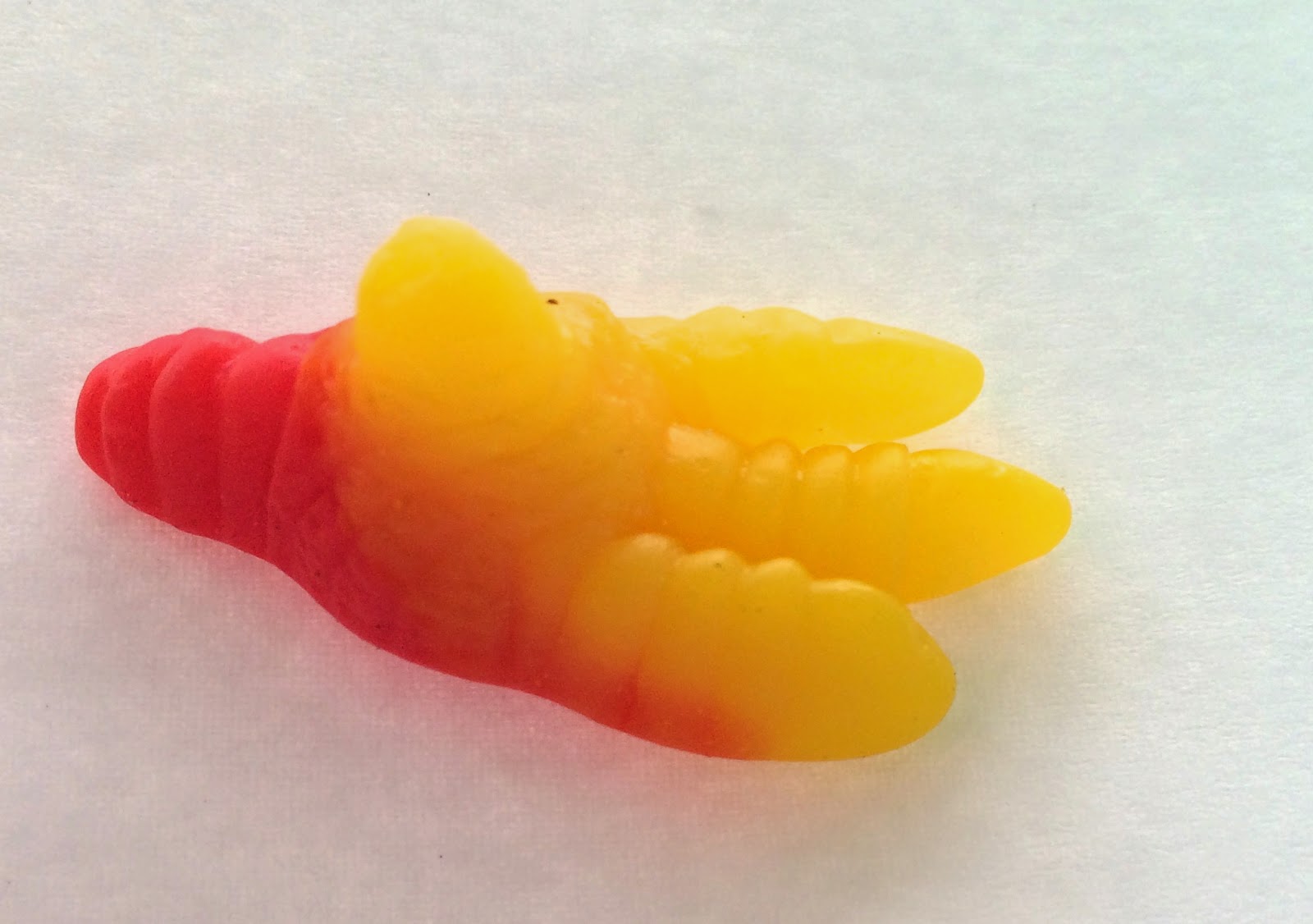 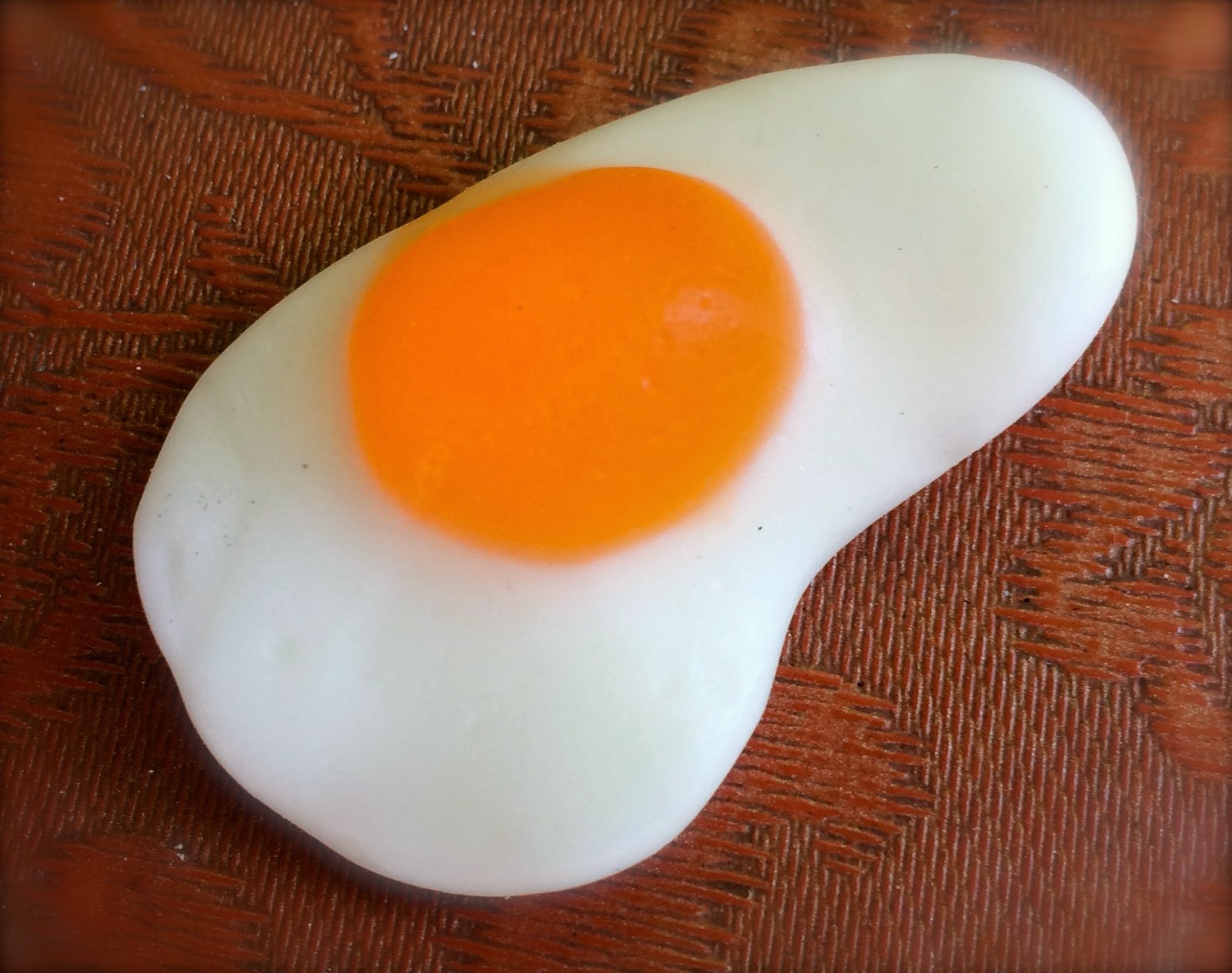 An array of recently collected gummies.... 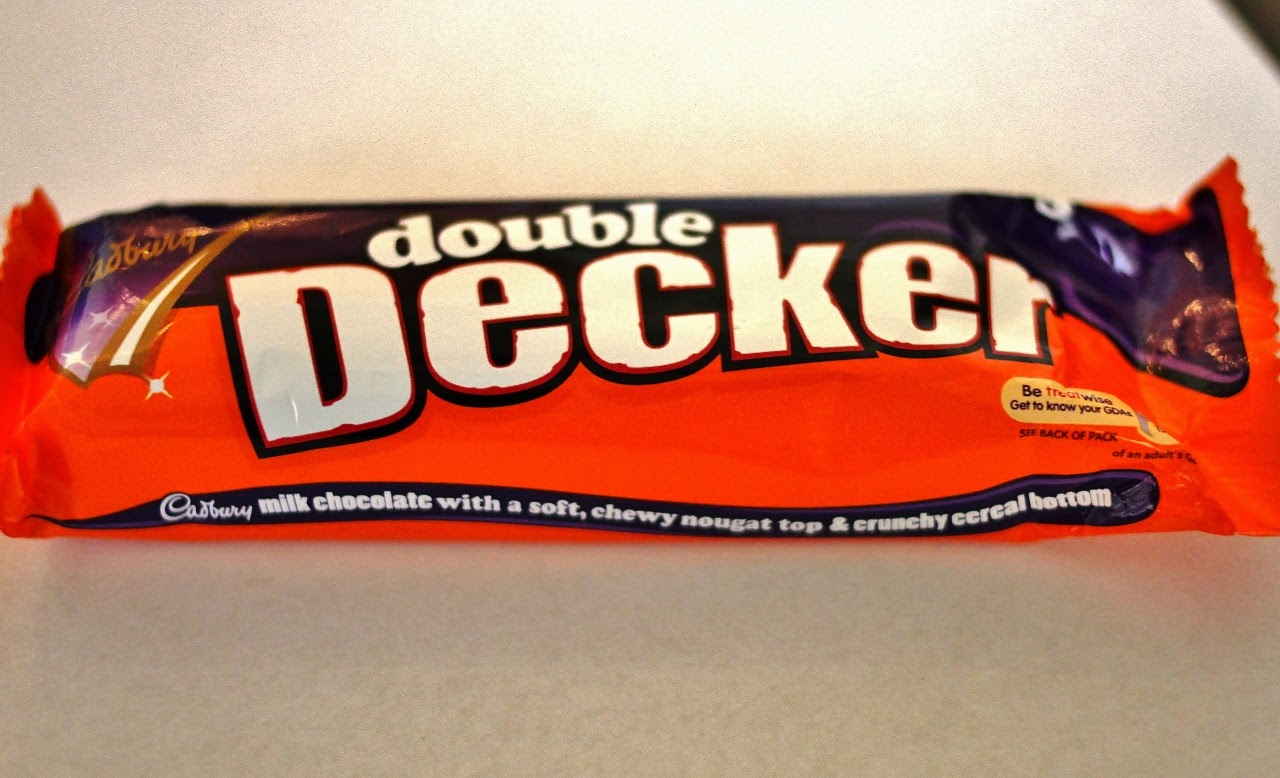 The Cadbury Double Decker is a childhood favorite in the UK, so obviously I had never heard of the chocolate bar until today when I stumbled upon it at an international grocery store. The Double Decker was aptly named after double-decker buses, the two-story buses that became a national symbol for British culture. Cadbury featured the buses in most of the candy bar commercials. 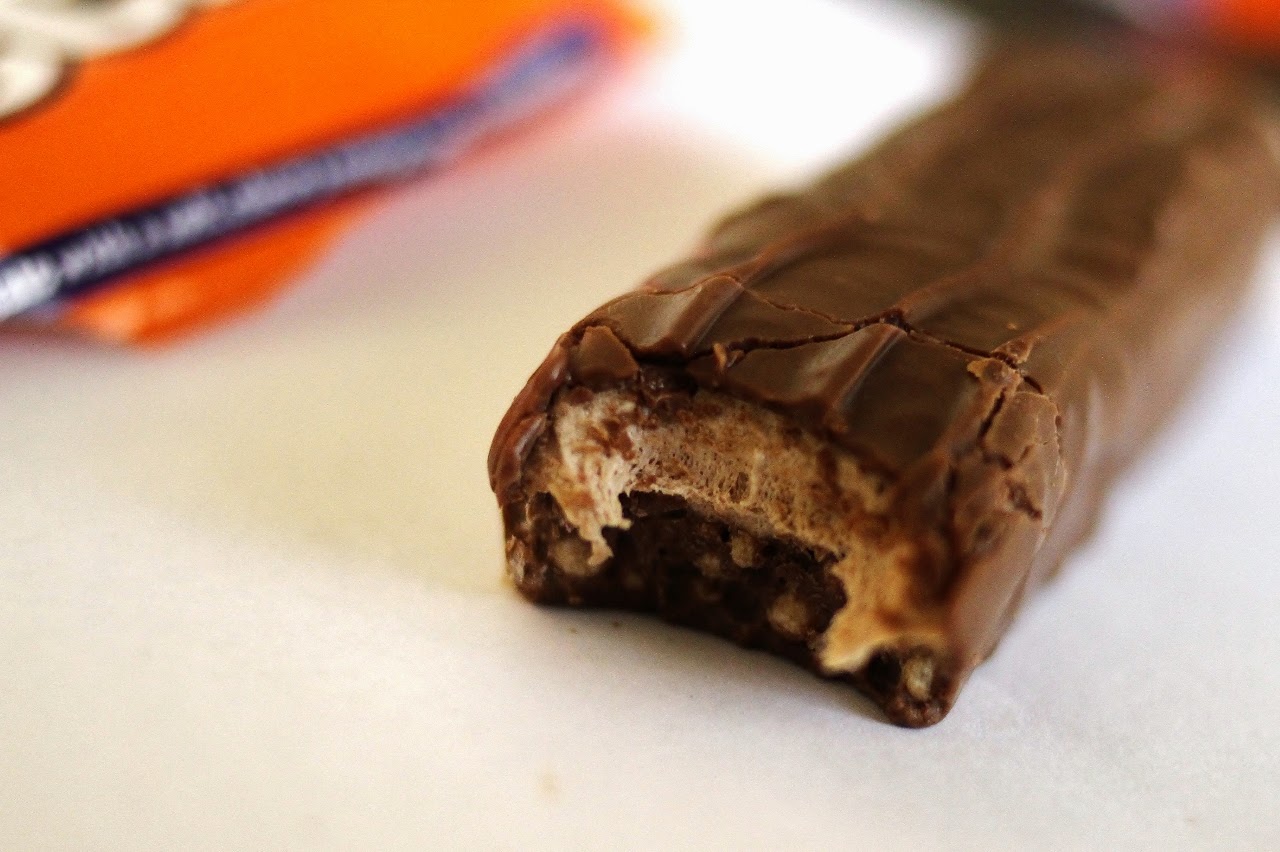 The Double Decker candy bar has a nougat top layer and crispy cereal bottom layer, and it's covered in milk chocolate. Apparently it's made with coffee, but you would never know it when you eat it. The closest thing I can compare it to is a 100 Grand bar except instead of caramel, the Double Decker substitutes nougat.

The candy bar was a great size, and extremely filling. I ate it for lunch and didn't even think about eating again until about 4 or 5 hours later. The nougat was my favorite part because there was so much of it.

My only issue was the crispy cereal bottom. If it had been crispier and "popped" more, per say, it would have gotten a 5 in my book. 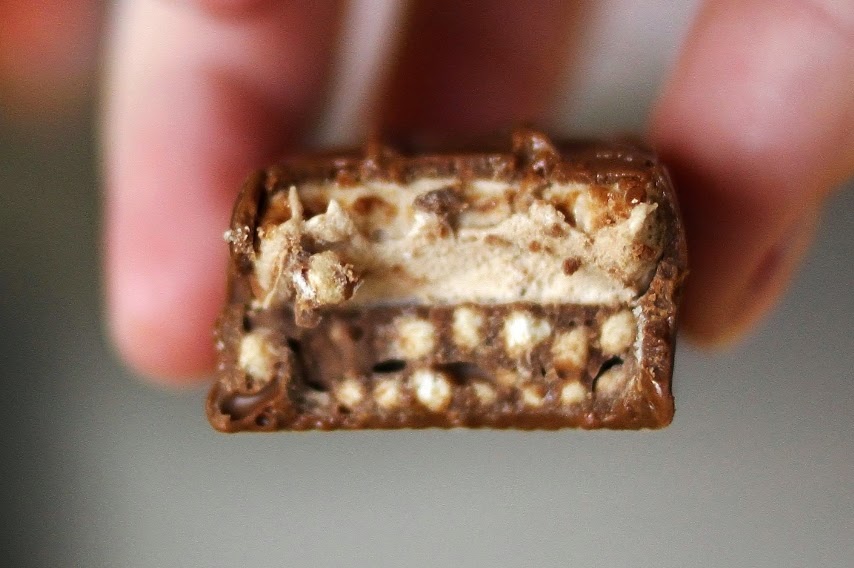 If you want to check out more reviews from me, or other candy-related musings, visit me at the Candy Direct blog! 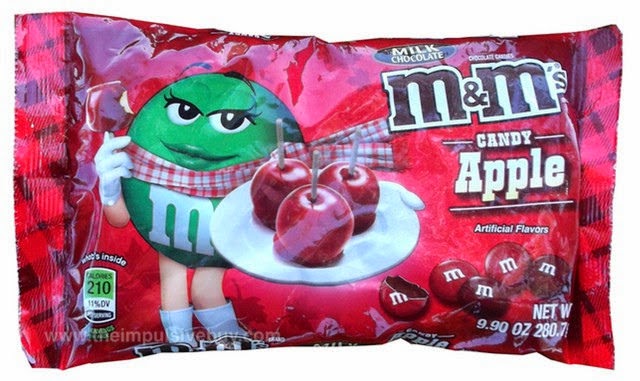 Click here to read the review of the new Candy Apple m&m's on theimpulsivebuy.com. Add these to the wish list! I can't wait to find some to taste test!
No comments:

Warm Up for Doctor Who with Bassetts Jelly Babies 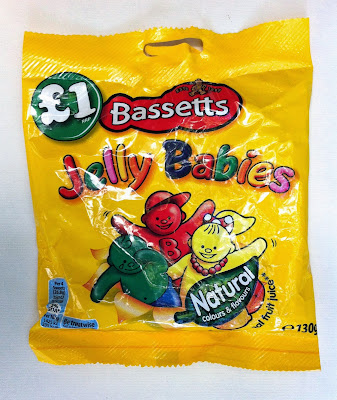 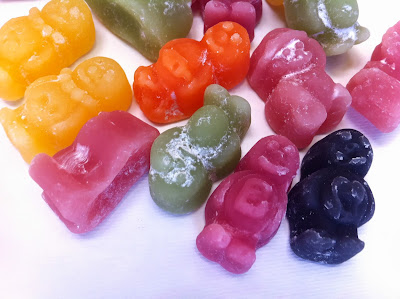 The newest incarnation of Doctor Who begins this month starring Peter Capaldi as the new Doctor. In honor of an auspicious new season, let's celebrate by devouring the favorite snack of the Doctors of old (especially Tom Baker, the fourth Doctor), Bassetts Jelly Babies! A classic since 1864(!), the all-natural flavoring makes the Jelly Babies not only delicious but vaguely nutritious (or at least not so very unhealthy). Originally called "Unclaimed Babies" and later "Peace Babies," Jelly Babies remain the classic fruit jelly. Nice to know Dr. Who has such great taste! 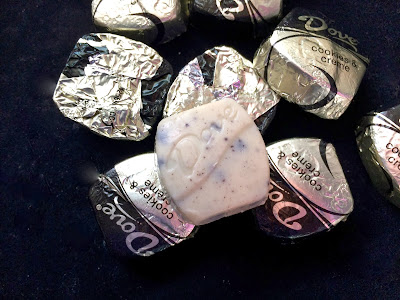 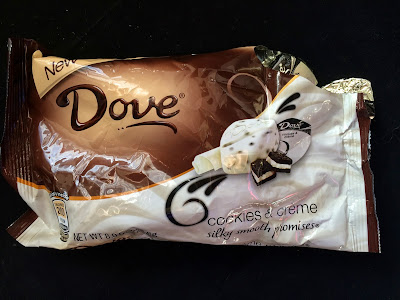 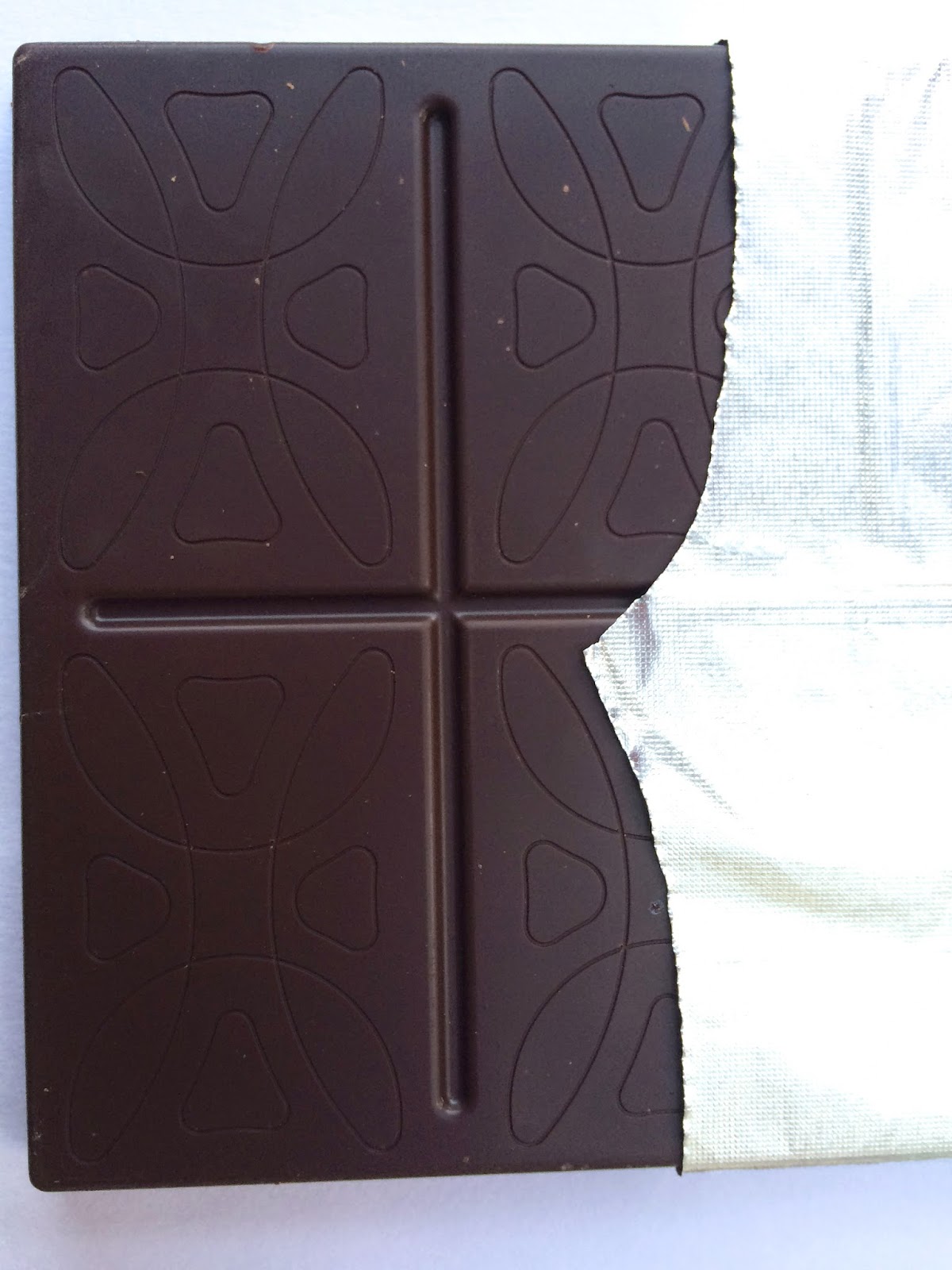 This Spanish chocolate bar by Valor consists of a deep dark chocolate, more bitter than sweet, packed with a variety of berries. In this case, "Forest Fruits" appears to mean raspberries and blackberries. This is a grown-up chocolate bar, with none of the cloyingly sweetness of your average drugstore chocolate. The seeds of the berries add a sense of additional substance to each bite as well as a tart note to balance the dark chocolate. It's a beautifully balanced flavor and completely satisfying. The bar feels like an elegant dessert in candy bar form. One would not consume this bar all in one go- instead, it's meant to be broken up and shared or consumed over a number of evenings. It's the perfect addendum to a good meal, providing the ideal finish. I loved it and wish I could find more in my area. Thanks, Abe and Bernice!

Via Grubstreet: 50 Candies to Eat Now 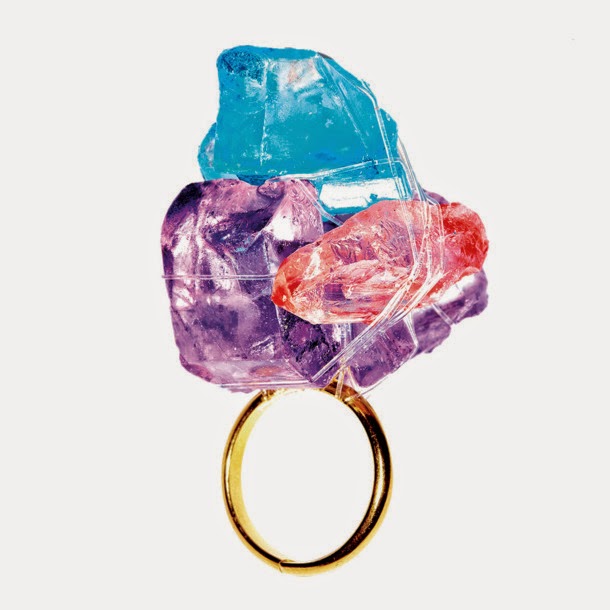 There is a fantastic article in today's New York Magazine/ Grubstreet blog detailing 50 candy purveyors of New York City and some of the both classic and incredibly innovative candies that one can procure. I'm entranced and have to track down each one. Especially this incredible Rock Candy Ring by Cynthia Rowley. Wow!! 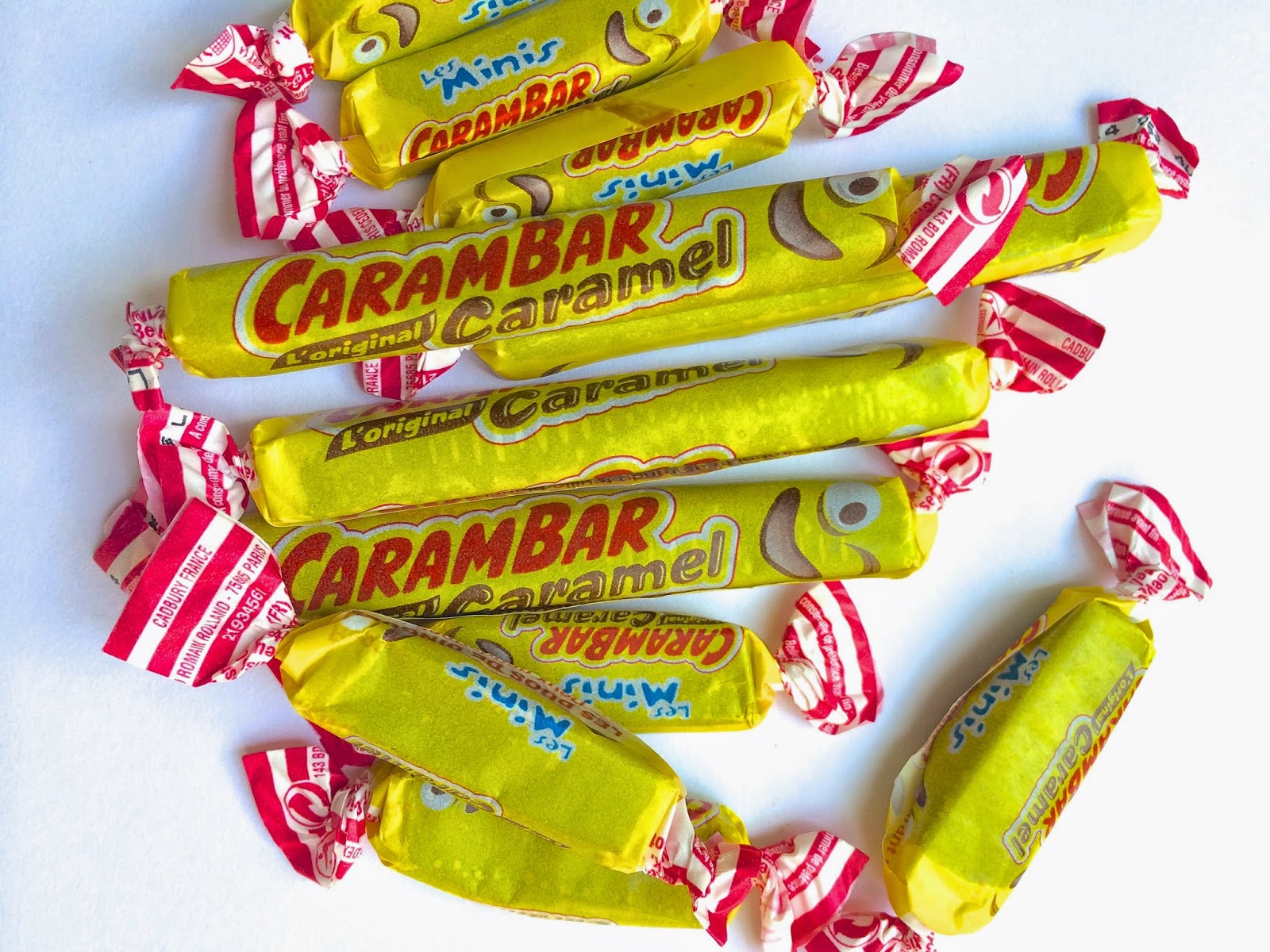 Imagine bite-sized caramels the consistency of a Sugar Daddy; that's a Carambar Caramel (l'original caramel!). It's a straight-forward, buttery caramel that you have to chew on a bit to soften it up. I like that- it makes the consumption into a process. It also allows you to throw some caramels into your bag without worrying about the melting factor. Delicious caramel flavor without any fancy extras thrown in, self-contained within one's bag, what more could someone ask for? I wish they sold these beauties in the United States! Thanks for bringing them back from Paris, Conor and Ronan! 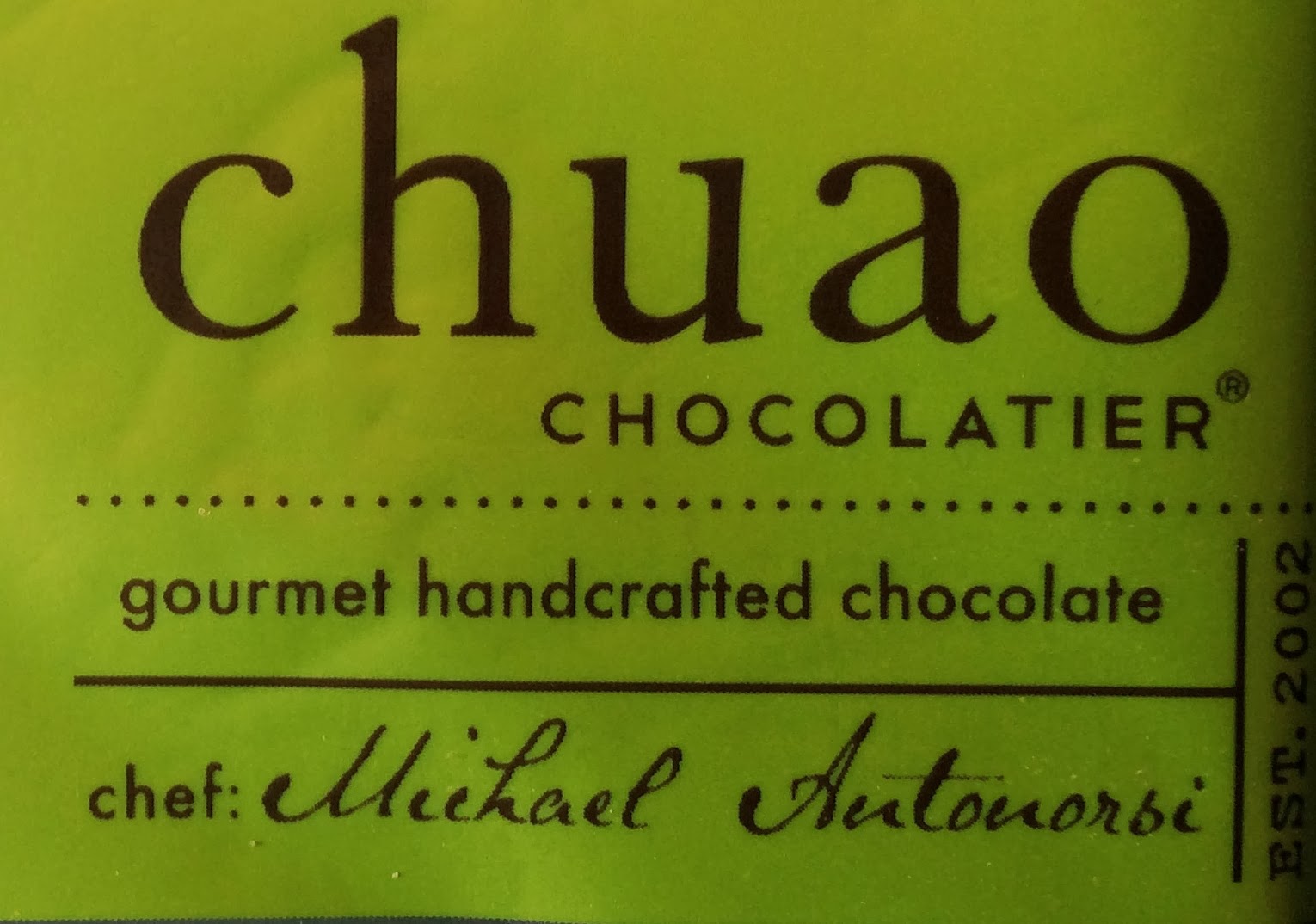 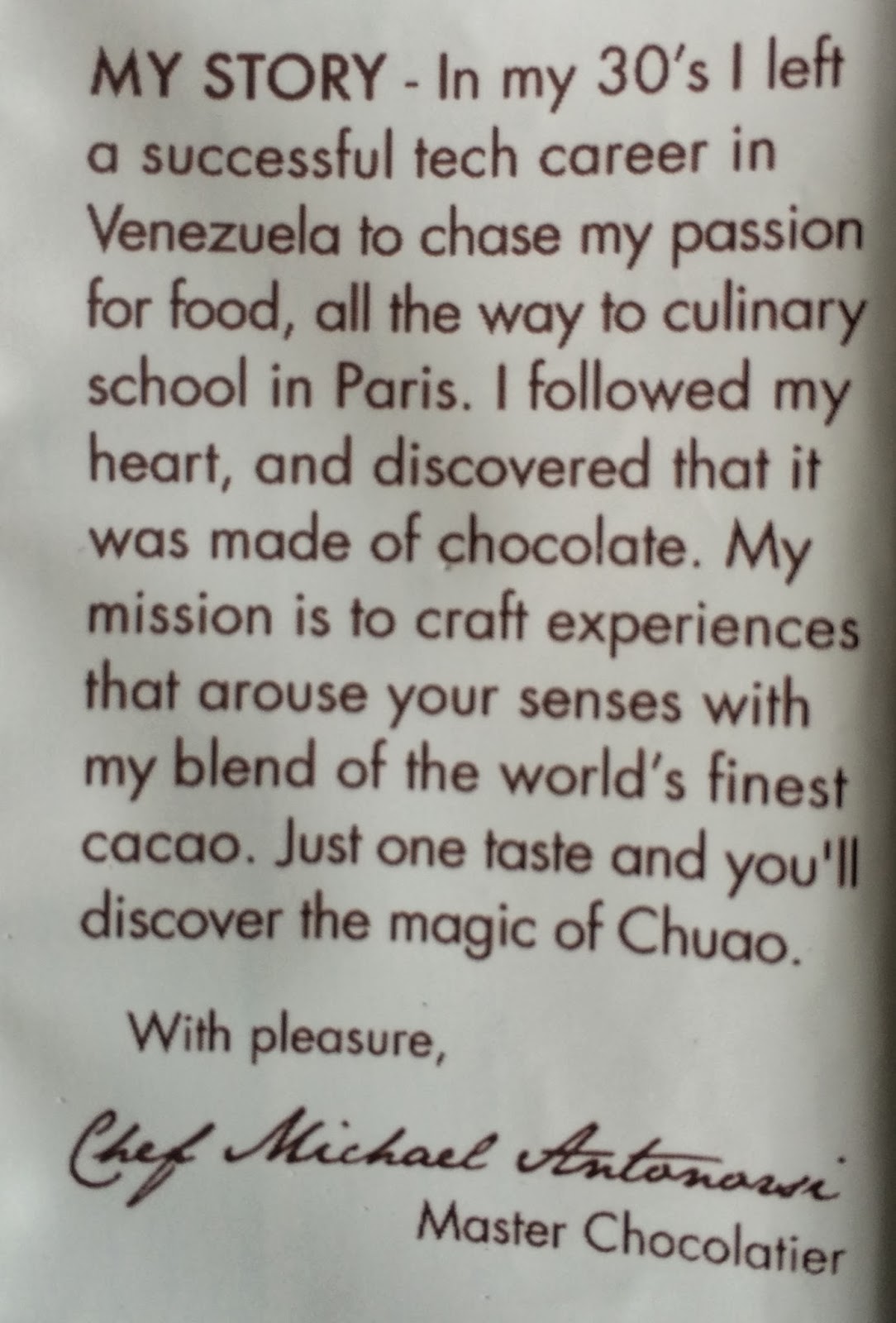 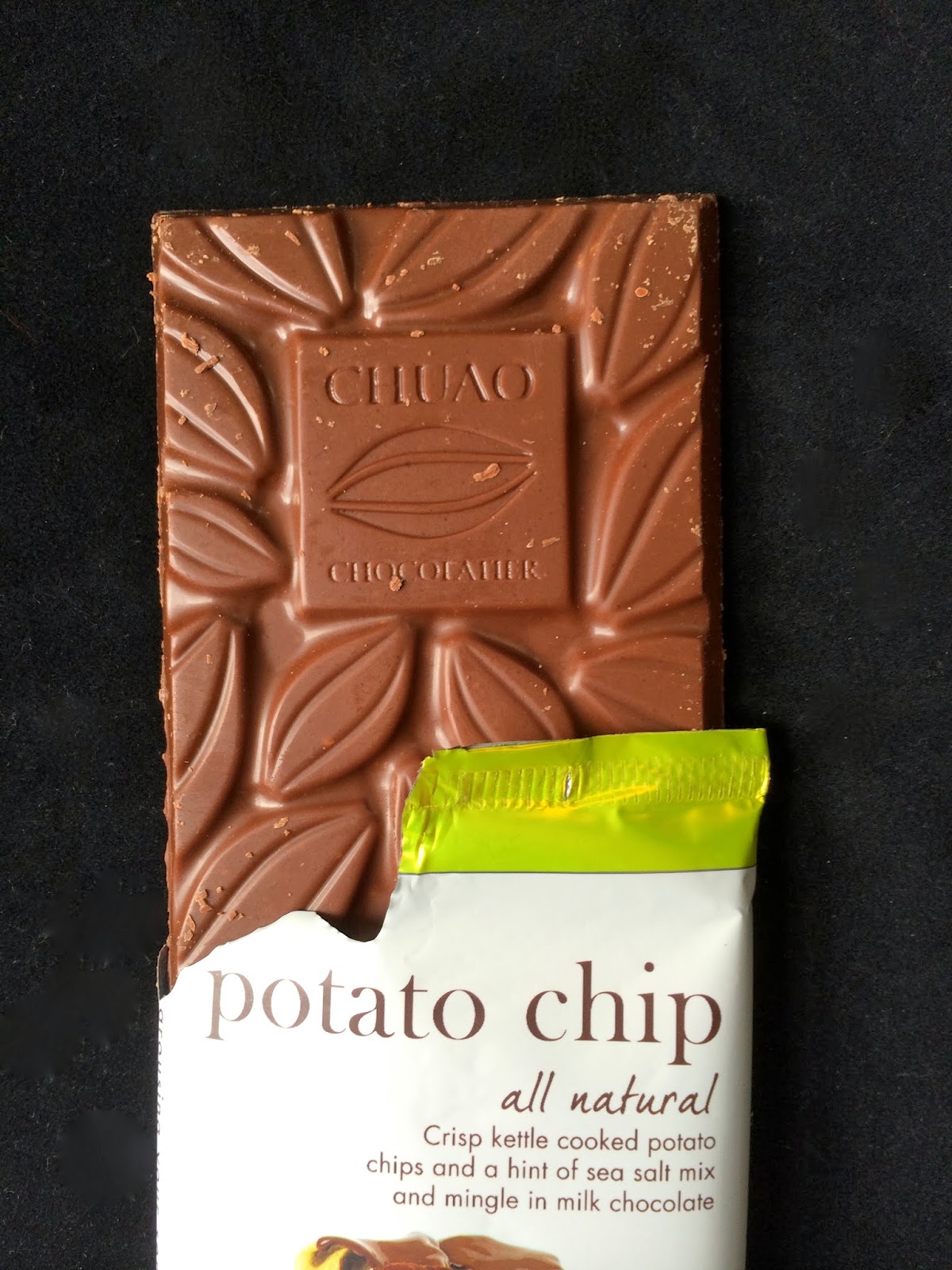 Potato chips and chocolate constitute a magical combination of flavors and textures- all of the sweet and creamy and crunchy and salty you could ever want in one bite. The Chuao Potato Chip Chocolate Bar blends all of these elements beautifully. I loved tasting that salty crunch in each bite. One issue I had not anticipated: potato chip oil. The additional oil from the potato chip does spread a bit across the bar resulting in vaguely oily chocolate. It wasn't like it tasted bad, but it's a little unnerving to eat chocolate and come away with oil on your hands like you've been eating a tub of lightly buttered popcorn. Overall, the bar is well worth a taste. However, I think that chocolate makers will have to wrestle with the oil element in crafting the perfect potato chip chocolate bar. I know it's possible- the dream remains alive!! 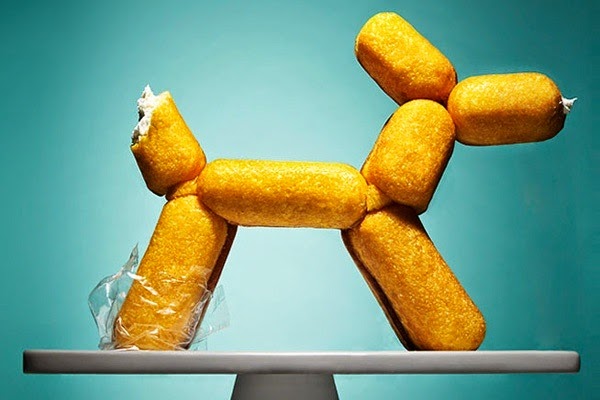