The New Cadbury Crispello: Just for the Ladies 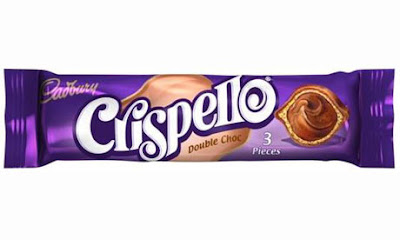 photo courtesy of The Guardian

This morning I read in The Guardian about a new candy bar being released from Cadbury geared especially for women. The Crispello consists of three individually-wrapped (and resealable) pieces of chocolate all wrapped within one larger candy bar wrapper. An exterior shell of Cadbury chocolate surrounds a crisp wafer, which in turn surrounds a center of light whipped chocolate. It certainly look enticing on the wrapper. So what makes this new candy for women instead of for the non-gendered masses? Here's what I'm guessing is Cadbury's justification: ladies want portion control, even though they must have their chocolate. Since we are unable to control our intake of chocolate (I am offended at this assumption, even though it is true in my case), Cadbury offers a bar that does the thinking for us, offering a candy bar not only broken into thirds and wrapped as individual pieces, but also making those wrappers resealable so that we can practice even further portion control on our own. Plus the interior chocolate is whipped and light so won't pack in as many calories overall. I'd like to mention that I've seen an awful lot of men who appear to have trouble with will-power when it comes to chocolate consumption so perhaps the message of the Crispero should not be put forth as a gender issue in the marketing department, but more of an overarching health issue. Of course, maybe this is Cadbury's answer to Nestle's Yorkie (Motto: "It's Not For Girls!"). Whatever my feelings for the negative gender advertising, I'm super into finding and testing one of these Crispellos. If anyone in the United States happens upon a purveyor, please let me know!
Click here to read the original article on The Guardian blog.