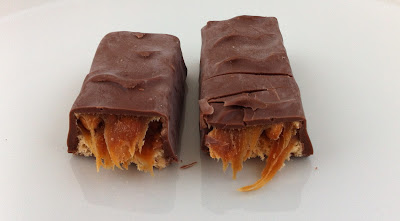 Smirk chocolate bars are the dairy kosher version of Snicker's. They're produced by Paskesz Kosher Company, a near-century old Kosher candy maker and distributor that originated in Hungary and has operated in Brooklyn for the last half-century. I'm confused but thrilled to have found this Smirk bar because, as reported in a post this past March, Pasketsz supposedly went out of business. A real loss. Anyway, I was lucky to discover this Smirk bar out in Brighton Beach, Brooklyn. It's a Snicker's bar with tiny variations on the basic components. The chocolate isn't as melty or milky. The caramel is thicker and constitutes a little larger proportion of the bar than in Snicker's. The nougat is a bit stiffer. I liked it.