I can't really believe this new study but I'd like to. Researchers at Louisiana State University tracked the health of more than 11,000 kids between the ages of 2 and 18 from 1999 to 2004 and found that children who ate sweets were 22 percent less likely to be overweight or obese than kids who shunned sweets. Really!? To read more about it, head over to CBSnews blog....
1 comment:

Email ThisBlogThis!Share to TwitterShare to FacebookShare to Pinterest
Labels: news

A Note on Firetruck Cakes: Delicious! 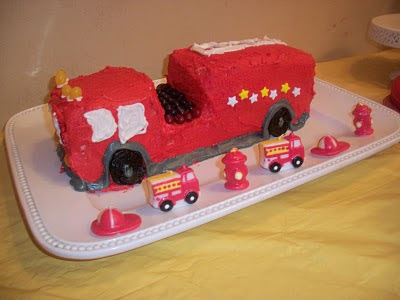 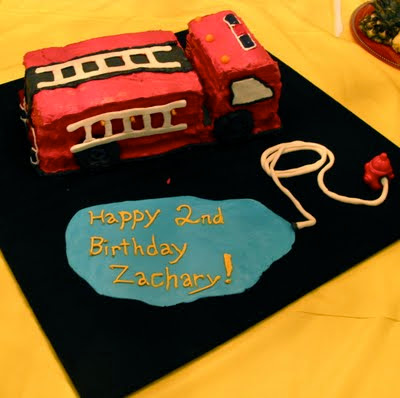 Zachary's 2nd Birthday
I've recently attended a number of parties celebrating birthdays of some very cool kids. What amazed me was the beautiful array of firetruck cakes- labors of love- created for the festivities. All delicious, all ingenious in their construction and decorative elements, I couldn't help but share a few of these innovative baked treats! Gumdrop lights, oreo cookie wheels, marshmallow fondant fire hydrant, the details on these are delightful!
1 comment: 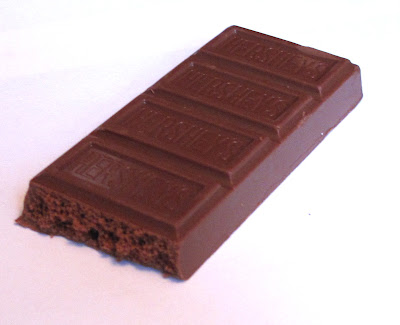 I'm not incredibly fond of Nestle Aero bars, and the aerated chocolate used as the selling point of these new Hershey's Air Delights sounded suspiciously similar to the Aero aesthetic. But these are better, surprisingly! The air bubble-filled chocolate center is a bit more spongy than its Nestle predecessor, and pure Hershey's chocolate enrobes the bar, adding a satisfying solidity to the candybar overall. In other words, one is less preoccupied with the lack of chocolate in the air bubbles than with the sense that each bite contains a whallop of chocolate flavor while remaining light as air. I like it! That said, I'd still take a traditional Hershey bar over an Air Delight. This tastes a little gimmiky to me overall- cool technique, but I don't think it's an improvement on the original. 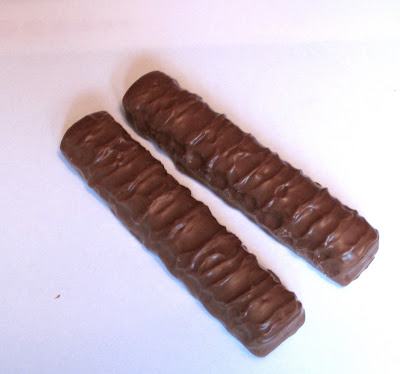 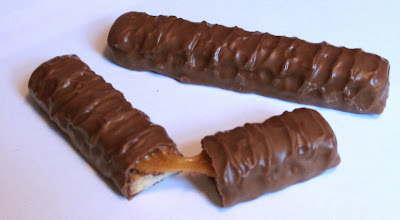 Upon first bite of the new limited edition Twix Coconut, I was grossed out. Ordinary yummy Twix taste pervaded by suntan lotion. But by the second bite, I was into it. It tastes a lot like the elusive Samoa Girl Scout cookie, and I love those. And this is bigger! I'm definitely getting a second... 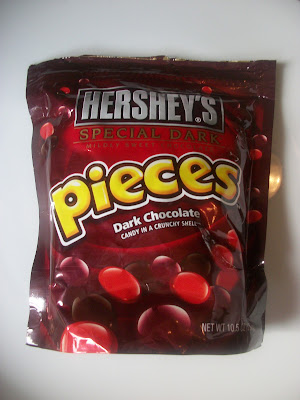 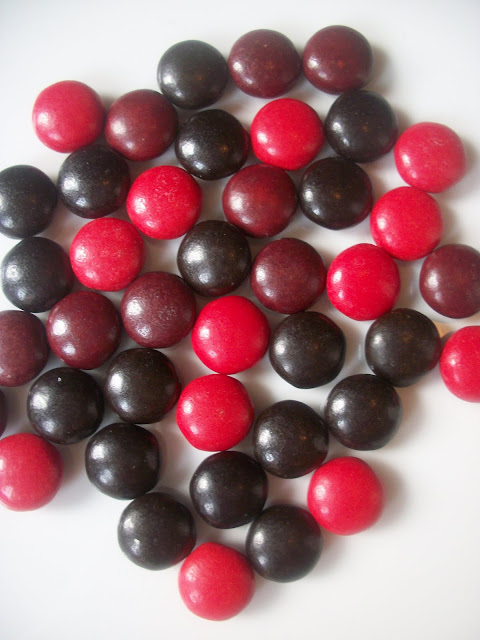 The new Hershey's Special Dark Pieces are basically a Hershey's Special Dark bar in m&m form. They're delicious, but then again, so is a Hershey's Special Dark, so this doesn't really come as a surprise. In fact, that wonderful unique flavor of the candy bar lends itself to bite-size form. It melts more easily in one's mouth, which was always my complaint about the candy bar, and the crunchy shell really compliments the dark chocolate flavor. I know they designed the shell colors to match the color scheme of the candy bar wrapper but I think they look a bit dismal. Hershey's should just assume that the flavor is connection enough to the candy's classic form and choose a beautiful array of bright colors to match the bright flavor of the chocolate. I want to see a rainbow! Thanks for finding these, Dan! 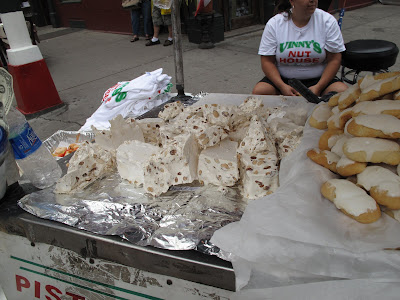 Vinny's Nut House is a colorful stand with Italian baked goods, cotton candy, and a variety of fresh made treats stationed along Mulberry Street in Little Italy in New York. It offers a nice selection, but the really special item on Vinny's menu is the extraordinary (not to mention beautiful) chunks of nougat. Vaguely resembling a combination of meringue and marshmallow in flavor but with a more solid consistency, the nougat is light, bright, and worth a trip to the Lower East Side.
2 comments: 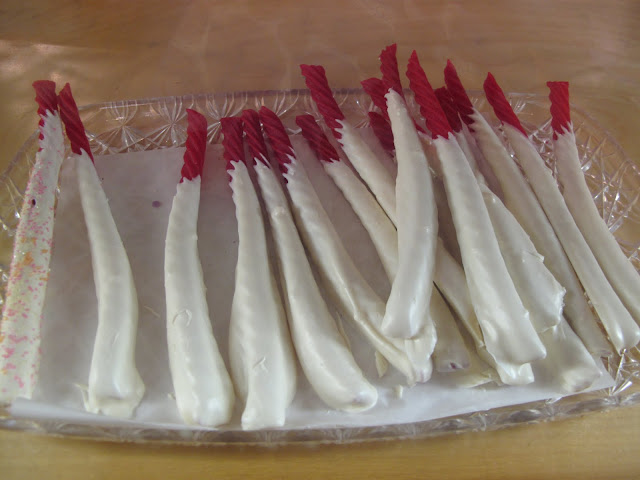 I grew up in Northern California, went to college in the East, and have lived on the East Coast ever since. One of the things I will never get used to is the pervasiveness of Twizzlers over Red Vines over here on the Right Coast. I used to stock up on bins of Red Vines every time I went home to visit family. Luckily, distribution of The Perfect Candy seems better these days and I can find Red Vines if I do some poking around- it takes some persistence, though. Is this all about distribution deals or do East Coasters really prefer the waxy flavorless Twizzlers? Anyway, I was recently visiting my family in Humboldt and stumbled across a brilliant use of Red Vine deliciousness- Red Vines dipped in melty white chocolate. Amazing! I don't even like white chocolate that much but the flavors were divine and the consistency outstanding and I find myself dreaming of them often. Old Town Coffee and Chocolate, downtown Eureka- if you happen through, pick some up. Hooray for licorice treat ingenuity!
2 comments: 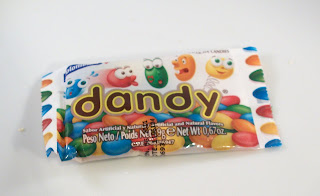 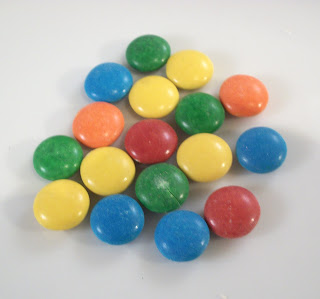 My friend, Zach, went traveling through Colombia and brought me back a pack of these colorful little chocolate Dandies that resemble m&m's. Dandy chocolate morsels are made by a large Colombian candy, coffee, and snack maker, Colombina Candy. Actually, they remind me of the British version of m&m's, Smarties, because their brightly colored shells actually taste vaguely fruity- not overtly, just a little tinge of fruit flavor that remains the same across the rainbow of colors. The chocolate is a little milkier than m&m's but not as instantly melty. In the hierarchy of colorful chocolate pellets, m&m's remain my favorites and Smarties and Dandies tie for second. I wouldn't say no to any of them, though. Delicious!

Straight from Candy Blog comes news of a new edition of the wide and varied Hershey's Kiss line: Air Delights! It sounds like they're similar to Nestle Aero bars- chocolate with little air bubbles suspended throughout, which leads to a more delicate chocolate taste. Aeros aren't my favorites, but I must find these new Hershey's Air Delights to taste test!
No comments: